In our fast-paced world everything changes, but the truth. It is therefore important that the memory remains 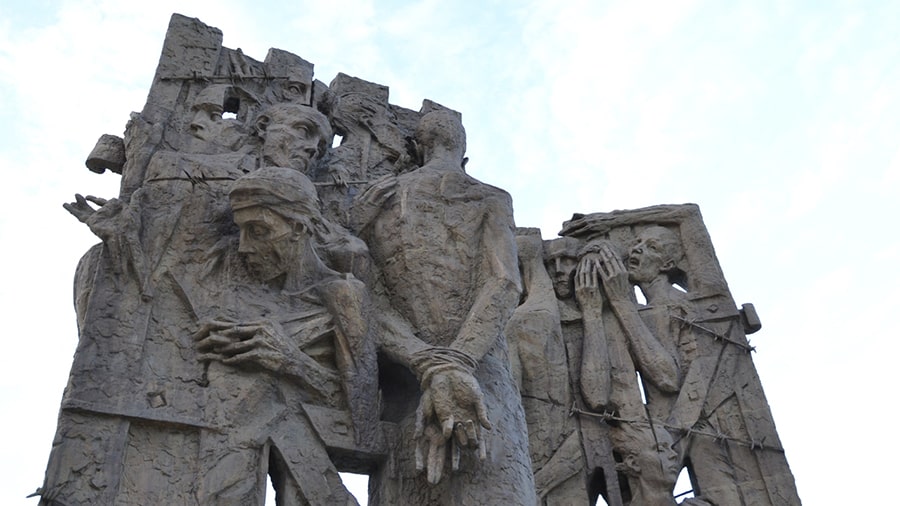 Many years have passed since Belarus was freed from fascism. But we hold close the memory of those who did not live to see the Victory… The meeting that took place in our Convent Sunday School on March 28 was dedicated to nazi German regime that existed in Minsk in 1941-44. Andrey Malets, a researcher from Great Patriotic War Museum was revealing to the public frightening facts of living under enemy oppression. “We must be talking and we must be telling the truth. For the truth is what history as a science has at its core and it must be made known. Speaking about today’s youth, it is difficult to generalize as to how much or how little history they know — each family is indeed a separate world. But we and our ancestors ought to remember this,” Andrey highlights. 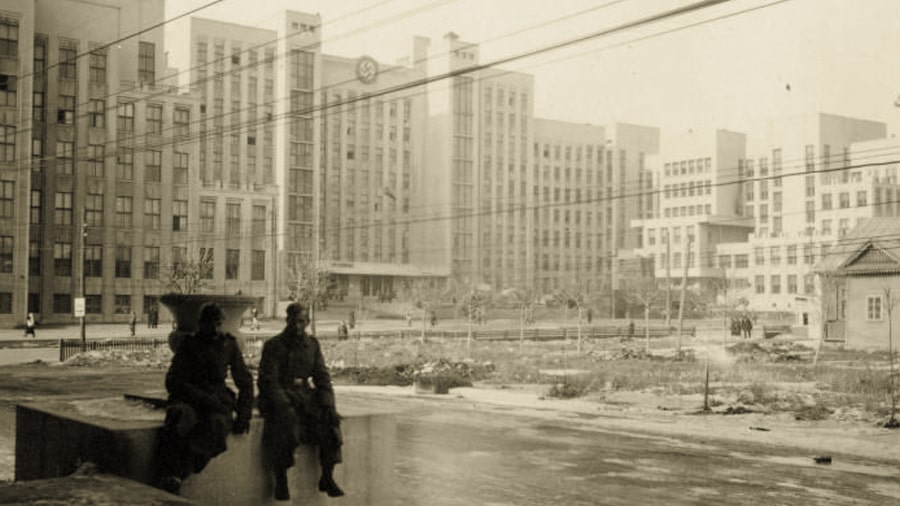 Occupation regime was installed in our land in the summer of 1941. The goal pursued by Hitler’s forces was devastating the country and wiping out its population.

Tens and hundreds of thousands were killed in death camps. There was no mercy for either women, children or the elderly. Prisoners with medical conditions were considered deficient and had no chance of survival. Mentally challenged people were also condemned to extinction. The 300 patients of the psychiatric hospital in Novinki village were poisoned with gas with the exception of a few, involved in farmwork. 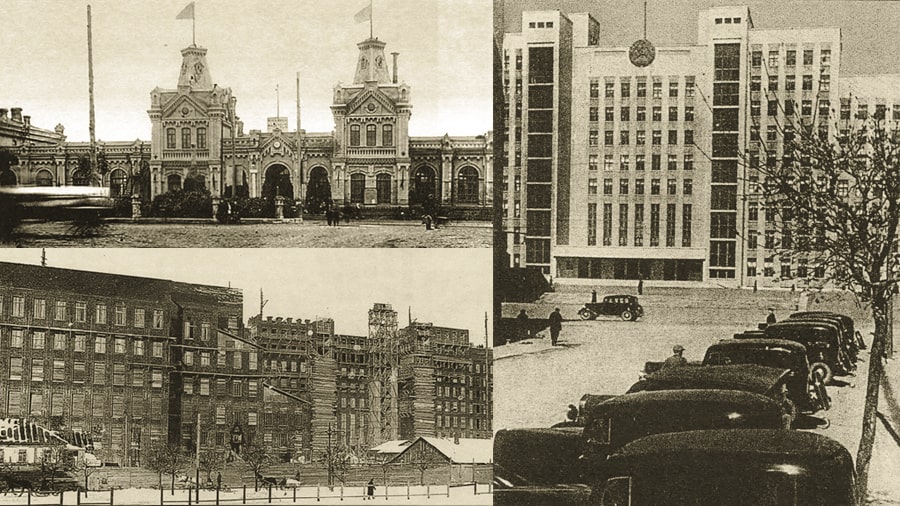 These photos from 1941 captured the last days and hours of the old Minsk, the city that we will never see again…

The nazis’ began with creating new administrative divisions. The Soviet Republic of Belarus was divided in districts. Minsk became center of Weissrutenia, an area that included western and, partially, central parts of contemporary Belarus. Weisrutenia, together with Lithuania and Latvia, became part of the Ostland reich commission, with Riga as its capital. 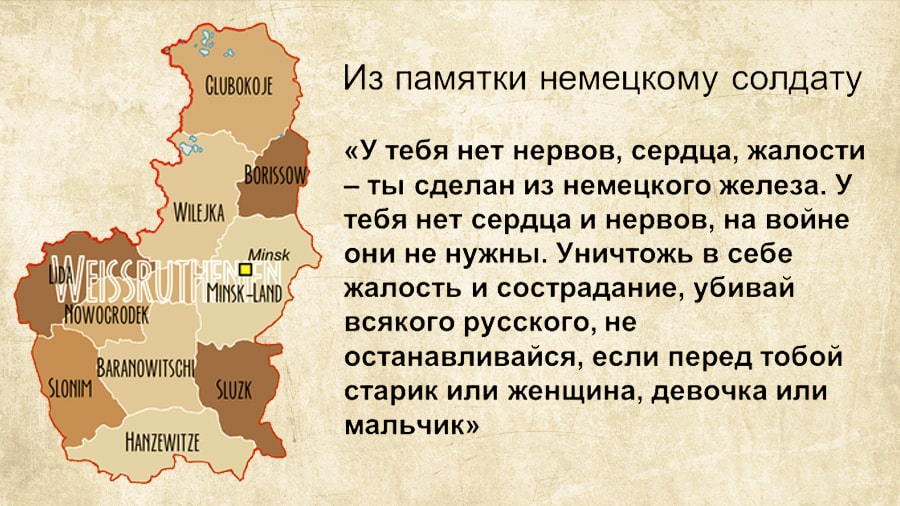 Despite their clearly dehumanized policies, the fascist authorities tried by every means to persuade the people of their benevolent intentions. They made false proclamations of the Third Reich being not an enemy but rather a redeemer, that came to free our country from the bolsheviks. Nothing could be farther from the truth. Principles of Generalplan Ost and thousands of documented war crimes prove that beyond any doubt. 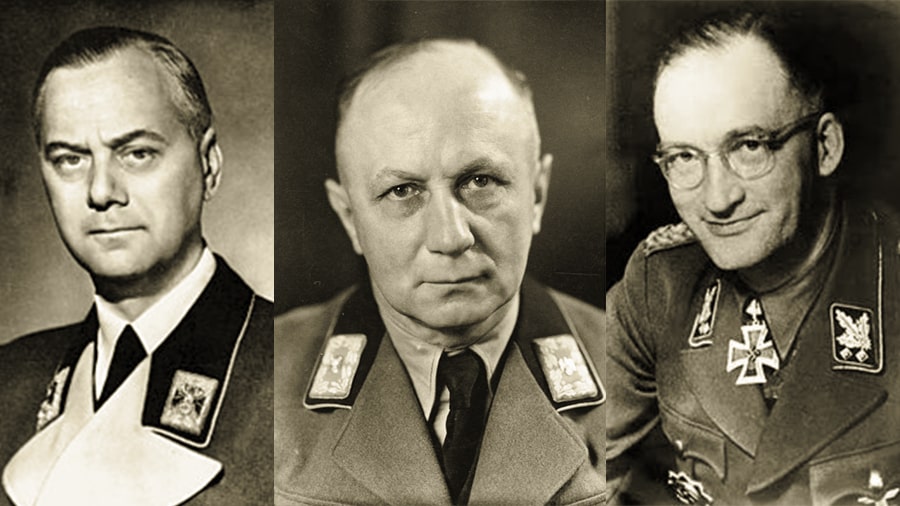 The reichsminister in charge of the occupied eastern territories was Alfred Rosenberg, a german political leader, known for shaping some key principles of nazi ideology, particularly ethnic policies of “racial purity” based on anti-Semitism and advocacy of “Nordic” expansionism. Wilhelm Kube, a nazi official with a somewhat contradictory reputation, was appointed Generalkommissar for Weissruthenia.

At some point, Kube's antagonistic attitude to some SS anti-Jewish actions began to incur disapproval on the authorities’ part. To an extent, his close contacts with “lower races” contradicted the fascist doctrine. He was actively supporting collaborationist movements and puppet organizations like Belarusian Youth Union or the Central Rada. These organizations were helping the occupation authorities, trying to promote public tolerance towards them. They were also training “volunteers”, traitors willing to serve the enemy for their private benefit.

Another noteworthy fact related to Wilhelm Kube is his idea of building an “elite” city, 15-20 km south of Minsk. In his scenario, described by a German historian Uwe Gartenschlaeger, the destroyed capital would serve as a giant prison, whereas Kube himself together with the ruling “elite” would reside in luxurious Asgard (the name of the “dream town” was borrowed from Scandinavian mythology and means “the city of gods”). Although there is spoken evidence of this plan being discussed with architects, no documents have been found in its proof .

After Kube’s death, his position was taken by Curt von Gottberg. This assignment resulted in significant changes. The new gauleiter’s contacts with the population were not nearly as close as his predecessor’s. The real intentions of the “liberators” were becoming more obvious.

It is a known fact that the nazis’ plan was making Belarus a territory of genocide and death camps. More than a few of those left their terrible marks on our land. Today learning about the atrocities happening behind the barbed wire is terrifying as ever before. 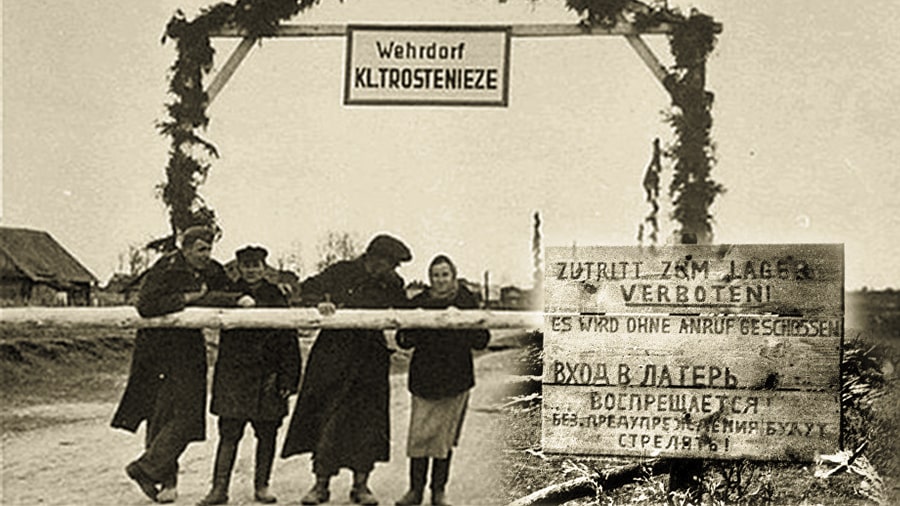 Trostinets . Trostinets was the largest death camp in the occupied Eastern Europe. Originally built in the summer of 1941 as a concentration camp, it later became a Vernichtungslager (extermination camp) primarily for jews, but not only. The trucks shuttling between the camp in Trostinets and Minsk prison were called Gaswagens. They had exhaust pipes welded into cargo boxes, used to transport prisoners. The passengers died enroute from carbon monoxide poisoning. Most other victims were killed immediately upon arrival at the nearby killing grounds and in gas chambers. The dead bodies were thrown into ditches and then pressed by a bulldozer. In 1943 the nazis realized that the War was likely to end not in their favour and began digging out the dead bodies and burning them in pits. .

The barbed wire surrounding Trostinets was always under high voltage. The sign next to the guard post read “Trespassers will be shot at sight”.

The Great Patriotic War Museum in Minsk has many terrible artifacts. Among them are the meat-hooks, used in burning the dead bodies. Human ashes were then carried to fields and used as fertilizers. The barrows used for that purpose have also remained.

15 months of Maly Trostinets existence resulted in estimated 206500 innocent victims. 6500 of them were murdered in 24 hours, as the liberation of Belarus had begun, and the invaders attempted in a hurry to destroy the evidence and the witnesses of their brutal crimes. 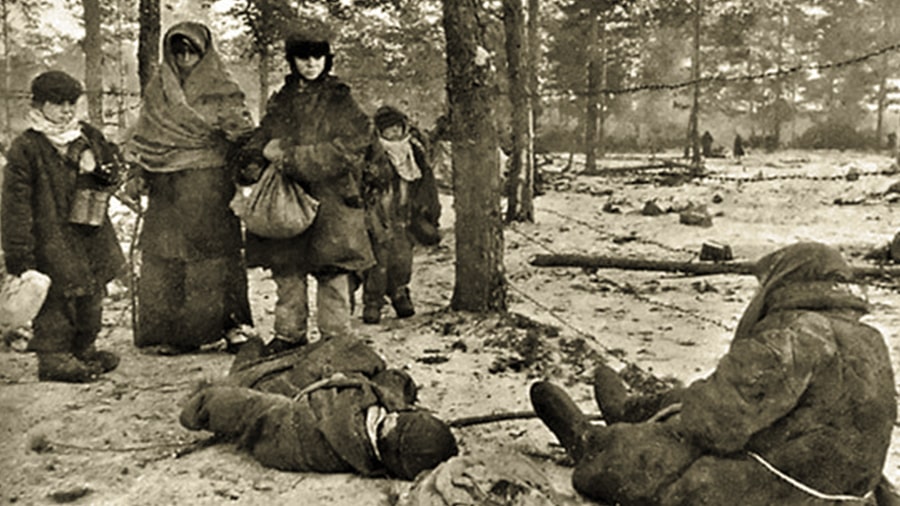 Ozarichy Extermination camps were typically under SS supervision. Wehrmacht, known to fulfill largely combat missions, was sometimes mistakenly believed to have milder policies towards civilian population. The story of Ozarichy concentration camp proves this opinion wrong. In 1944, as the Soviet Army was pushing forward on the offensive, Wehrmacht's high command resorted to the tactics of putting forward civilians as a cover. Almost 50 thousand people from Gomel, Mogilev, Smolensk and Orel regions and Polessie were put behind barbed wire in a swampy woodland without food, shelter, any facilities or drinking water. The prisoners were mostly children, the elderly, the sick or the disabled – people that could not be “used” elsewhere. Lying in the open air on the frozen ground under armed guard, they were trying to resist the cold by warming one another with body heat. Making fire, shelter or even mats with fallen deadwood was forbidden under penalty of summary execution. Many people were deliberately infected with typhus, that spread instantaneously due to insanitary conditions and the cold. The fascists were using the civil population as a hook to spread the disease to the enemy army. 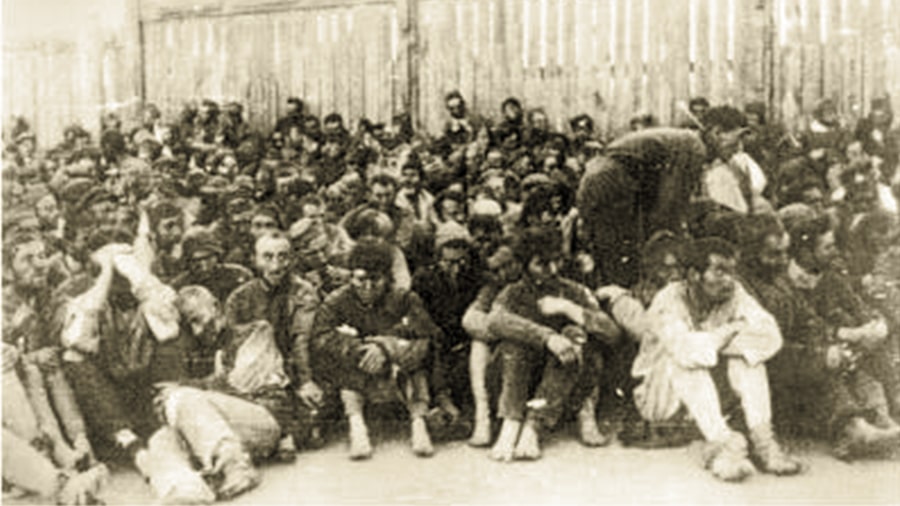 Drozdy Concentration camp in Drozdy, another deadly harborage for about 140000 people, was among the first nazi camps that appeared in our land. It was a filtration camp, meaning that different kinds of prisoners were delivered here and then redirected to various facilities, depending on their status. The remaining reports of the camp supervisor to higher authorities contain accounts of causing the prisoners’ death of dehydration by feeding them with rotten salted fish and completely excluding water. That was done on a mass scale with a view to ammo economy.

Risking their lives, Minsk residents were trying to save the victims or, at least to relieve their suffering. They were smuggling bottles with water into the camp, but the captives had not many chances to use them because drinking was strictly forbidden. They remained hidden in the ground to be found by modern researchers.

Stalag 352 Stalags were camps created by the Wehrmacht armed forces to keep prisoners of war who belonged to the rank and file. The nazi command were afraid of losing control of the camp due to soldiers rallying around officers. They separated POWs of higher ranks from enlisted personnel and held them in other facilities, called oflags. Stalag No. 352 was created by the Germans in June 1941 near the village of Masyukovshchina in Minsk region.

The prisoners of Stalag 352 were forced to live and toil in subhuman conditions, with a daily dietary of 80 to 220 grams of rotten bread, no medical treatment and roofs made of barbed wire. The spotted fever epidemic of 1942 was taking the lives of 200-300 people every day. The total number of people who died here, reaches 80 thousand. According to modern research, 80% of these deaths occured due to inanition. Some of the victims’ names are written in the Memorial Book, but thousands and thousands remained unidentified.

Sick, hungry, exhausted people behind the wire were doing everything possible to keep up the combative spirit. Hand-written clandestine issues of Stalag newspaper contained caricatures and pamphlets, mocking the nazis and the fuhrer. A few of them have survived the strict interdiction and remained to the present day. 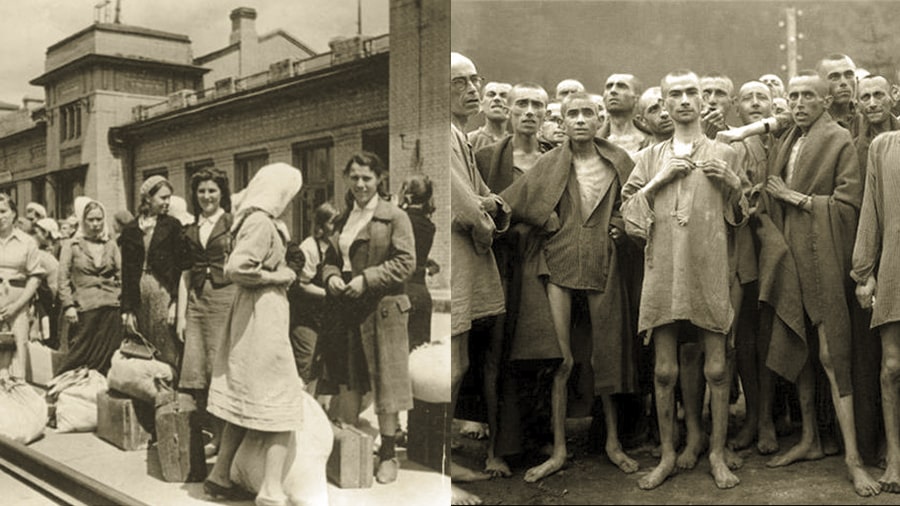 Some of the captives were sent to Germany or other occupied territories to serve as slave labour. They were referred to as “ostarbeiters”. According to Generalplan Ost, 400 thousand people were exported from Belarus and were subject to most severe conditions of all foreign slave workers that nazi Germany exploited.

Initially a recruiting campaign was launched for workers to go to Germany, but it failed to attract volunteers. Forced recruitment and forced labor were implemented, although propaganda still depicted them as volunteers. The Germans resorted to mass round-ups, often using the ploy of targeting large gatherings such as crowds at public events, with entire groups simply marched off at gunpoint to waiting cattle trucks and deported to Germany. 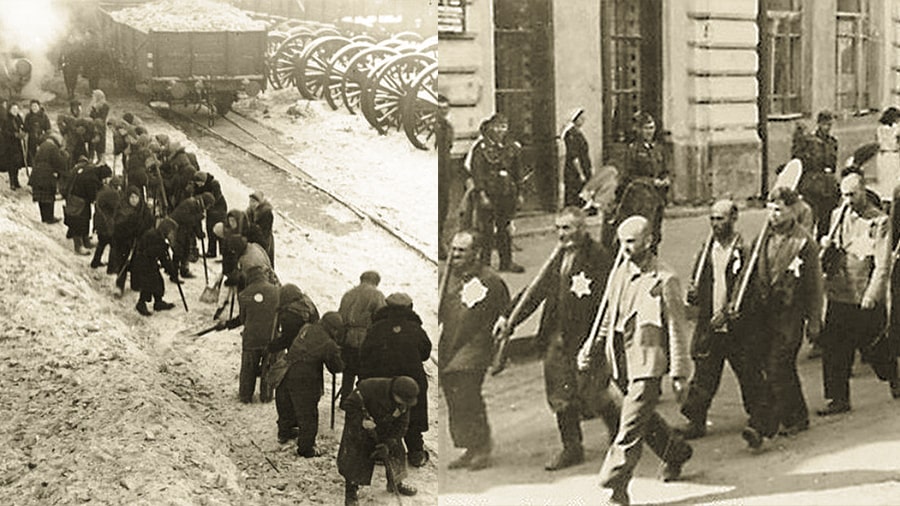 According to the 1937 population census, Minsk was 50% Jewish. The Minsk Ghetto was created soon after the German invasion of the Soviet Union. It was one of the largest in Belorussian SSR, and the largest in the German-occupied territory of the Soviet Union. Minsk ghetto was liquidated on October 21, 1943. On that day, of its 88 thousand residents, sixteen remained alive.

The official statistics suggests that 800 thousand jews were slaughtered on the territory of today’s Belarus. Those were not only locals. People from Germany, Austria, Czechoslovakia and Poland were brought here to perish in the terrible death chain.

This bitter chapter in our war chronicles is related to the Soviet Partisan movement, that originated in 1941 near Pinsk. The movement soon spread all across the occupied territories, and its presence has been an aching thorn in Wehrmacht’s side. Partisan units were effectively harassing German troops and significantly hampered their operations in the region. The occupation forces then showed their true face and openly declared that any populated locality under suspicion of any contact with partisan groups will be subject to punitive operation. 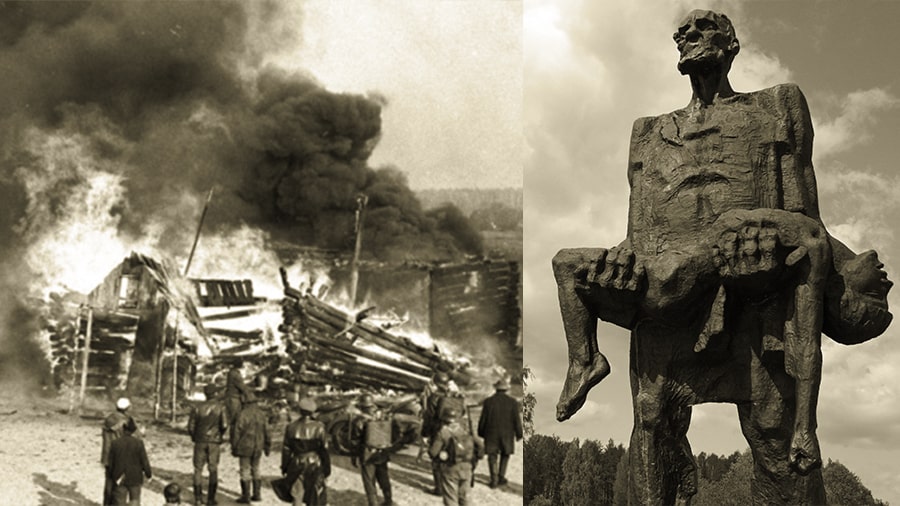 Everybody knows the name of the village that became a haunting symbol of this tragedy. Khatyn with its 149 residents was burnt to the ground on March 22, 1943. It is one of 9000 villages that suffered under the occupation. 186 of them were never rebuilt. A draw well is all that is left of Ritalets in Minsk region. 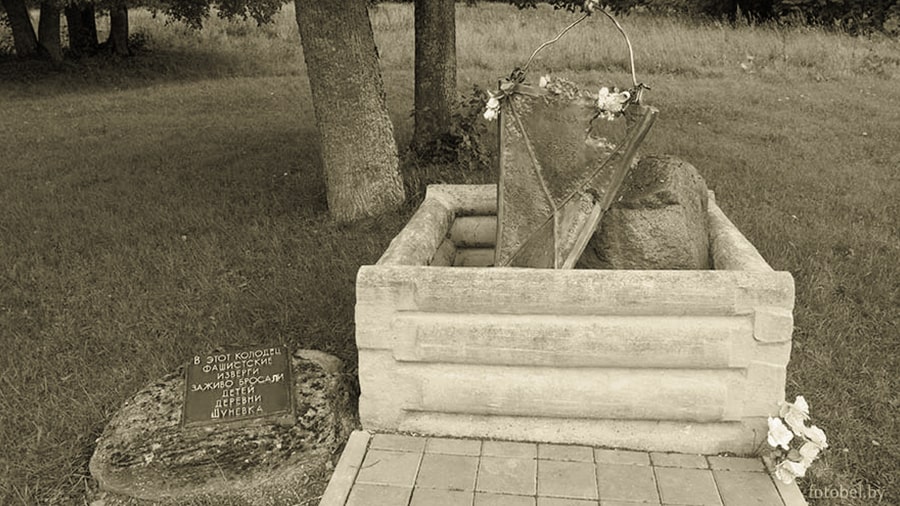 The inhabitants of Shunevka village have all been murdered by a death squad. The executioners have burnt the adults alive in a wooden barn and thrown the 16 children in a deep well and filled it with stones.

A total of 209 Belarusian cities have been devastated by the German troops. There is not one single community in our country that remained unaffected.